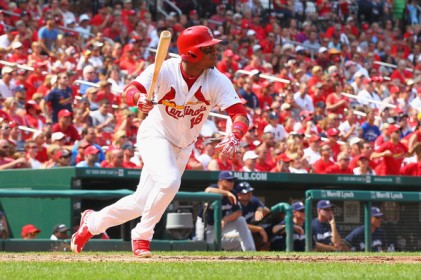 Oscar Taveras entered this season as a unanimous Top 5 prospect in baseball, and many scouting outlets felt he was already Major League ready. He tore up every stop in the Minors, even winning the Texas League MVP award in 2012, while in Double-A. If not for an injury plagued 2013 campaign, Taveras may have made his MLB debut last year. Instead, he began this season in Triple-A, where he continued to dominate. Finally, after what seemed to be too long of a wait, Taveras made his MLB debut on May 31, and did it in grand fashion, as he hit a towering home run in his 2nd at bat. However, the Cardinals Rightfielder has struggled to dominate the Majors in the same way he did the Minors. In 205 Big League plate appearances (PA), the 22-year-old has slashed just .224/.268/.292 (avg/obp/slg) with only 2 home runs. It isn’t too surprising to see a young prospect struggle in his first taste of Big League action, but there are some red flags in Taveras’s performance thus far.

As I said, there are some concerning trends in Taveras’s production thus far, but there are also some very promising things. The first thing in Oscar’s favor is that he is still very young at just 22 years old. This is not Oscar at his peak, as he is going to get stronger and will make adjustments to help his chances of competing at this level. Along with his youth, just about every scouting outlet agrees on Taveras’s ability and overall potential, with all of them believing that his elite bat speed and exceptional plate coverage will make him an outstanding regular in the Majors. And to a certain extent, those outlets have all been correct, as his bat speed and plate coverage have helped him post a far better than league average K%. Another good sign for Oscar Taveras is that he does not seem entirely overmatched, as he is swinging and missing just 5.1%, which is 4.3% below league average. Oscar’s ability to make contact bodes well for him being able to keep his K% well below league average. Even as the other statistics like his slash line have not matched the hype quite yet, we are dealing with only 200 PA and Taveras has a strong track record in Minor Leagues that suggests he is much better than this. One last reason for optimism is it seems Taveras is getting quite unlucky, as he has posted just a .256 Batting Average on Balls In Play (BABIP). The league average for BABIP is .298, and there does not appear to be any strong correlation for BABIP from season to season, which suggests Taveras should be able to rebound in the future.

Now that we have looked at the positives for Oscar Taveras, it is time to point out some red flags in his performance. Starting with where we finished in the positives, his BABIP. As I explained, Taveras is likely to see his BABIP rise just due to regression to the mean, but BABIP is also affected by certain types of batted balls, as some balls in play go for hits more often than others. For example, Infield Flyballs (IFFBs) go for outs almost as often as strikeouts, Line Drives on the other hand go for hits the most frequently. Taveras, unfortunately, has a very poor batted ball profile thus far in his career. Among the 320 hitters with at least 200 PA, Taveras ranks 40th in Groundball% (GB%). This may not seem overly concerning, but the majority of the players ahead of him are speed first, low power guys. Taveras is not fast and he is supposed to at least have 20 HR power, so this is not a good trend for him. Even more concerning, however, is the fact that he ranks 13th with a 17.6% IFFB%. As I stated above, IFFBs go for outs nearly every time. Taveras also sits 4% below league average in LD%, so he is not hitting enough balls that go for hits most frequently. Taveras’s poor batted ball profile culminates in him posting a very poor BABIP. His BABIP is still likely to rise just by regression, but if he continues to hit balls in play like he has, then he will continue to post a below league average BABIP. Further reason for concern is Taveras’s inability to hit Major League fastballs. Against hard pitches, as classified by Brooksbaseball.net, Taveras has hit just .218 and slugged a disappointing .242. It seems Taveras has been unable to catch up to Major League velocity, as he has yet to pull a fastball in the air. Unfortunately for Taveras, he is not much better against breaking and off-speed pitches, but he has managed a .333 slugging percentage against both pitch types. Taveras’s struggles against breaking and off-speed pitches stems mostly from his poor plate discipline, which was well documented throughout his Minor League career. In the Minors he was able to make solid contact, whereas he has not been able to do so thus far in his brief MLB career. There is no doubt that Major League pitching is much better than even Triple-A pitching, and right now it seems that Taveras’s aggressive approach is overmatched in the Majors.

Taveras is still just 22 years old and has ranked among the top prospects in the game for years, but he is really struggling at the highest level. Every young player has to make adjustments when they first come up and there is no doubt Taveras will improve. Yet, it is worth asking whether we should be concerned. Taveras’s ability to make contact at a much better than league average rate, bodes well for his future, but right now his contact has not been good contact. With too many GBs and IFFBs, Taveras will need to improve his batted ball profile in order to develop into the All-Star hitter many scouts predict him to be. And for Taveras, his bat is his only way to help his team, as he is a below average defender and base runner. With just about all his value coming from his offense, Taveras will need to make many adjustments at the plate in order to develop into the solid regular that experts expect him to be. Many of his issues thus far can be attributed to poor timing, resulting in too many GBs and IFFBs, but 200 PA is a long time to have poor timing. This off-season will be vital for Taveras, as he has plenty of adjustments to make in order to compete at this level.