Recently, Dan Szymborski of Fangraphs wrote an article handicapping the MVP award race in both leagues. His piece used his predictive modeling to determine the odds of each player winning the award. Each league appears to be a very tight race with plenty of season left for someone to pull away; however, with much more discussion surrounding the awards races since the Trade Deadline has passed, I thought it would be an interesting topic to dive into. While this article will only look at the NL field, a second piece will analyze the hotly contested AL MVP race as well.

The list of NL MVP candidates with their odds of winning according to Szymborski is shown below: 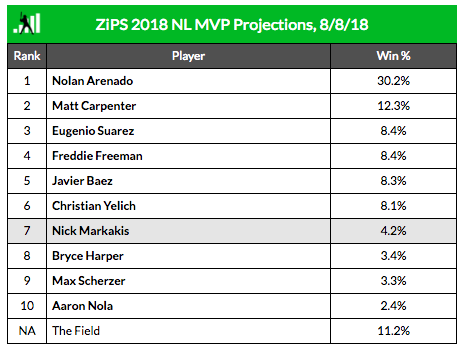 I will not discuss every player on the above list because they are not all viable candidates or particularly interesting; nevertheless, this is a packed list. While Szymborski’s projections make it appear as though Nolan Arenado is the clear favorite, there is plenty of time for that to change and plenty of contenders to change that. I will cover the case of the 5 players I find most interesting and expect to be prominent in the discussion come the end of the season and I will discuss them in the order they appear in Szymborski’s projections.

While on August 8th Arenado captured over 30% of the odds to win the NL MVP, he did not lead the league in a single Triple Crown category. While I am not a huge proponent of using batting average, RBI and Home Runs to evaluate hitters, they are significant statistics in the minds of many MVP voters. Despite not leading the league in many major statistics, Arenado has posted strong numbers across the board, both offensively and defensively, including a league leading .410 wOBA and his typically elite defense.

What will hold Arenado back most is likely his home/road splits, especially since he calls Coors Field home. While his 125 wRC+ on the road pegs him as 25% above average as a hitter on the road, it is a far cry from his 164 wRC+ at Coors. This will likely weigh heavily on the minds of many voters as the field of candidates is very crowded.

Carpenter’s resurgence since an uncharacteristically poor performance early in the season that saw him hit .140 through May 15th has been well documented. Despite his immense struggles early, he currently leads the league in home runs and the Cardinals are now squarely in contention, which improves his chances of receiving MVP votes for his performance. To further boost his case, Carpenter currently leads the NL in WAR and wRC+ and has led all of baseball in wRC+ since May 16th.

Carpenter will likely be held back by his low RBI total and the reputation that he is a below-average defender, who has played 1st base too often to receive much positive contribution for his defense. While I would not go as far as to argue Carpenter is the superior defender to Arenado, he has posted 5 DRS more than Arenado this season in a smaller time, which goes to show that the difference may not be as big as we think.

Freeman’s candidacy will likely benefit from the surprise success of his team, as few predicted the Braves to be in 1st place in the middle of August. Regardless of the success of his club, Freeman has put together an MVP-caliber season. His .320/.400/.536 slash line is incredibly impressive and good for the second-best wRC+ in the NL this season.

Despite playing well defensively, Freeman will likely be brought down by the fact he is strictly a first baseman. He will also be hurt because his home run totals are behind those of the other top hitters as is his RBI total.

Baez may be the most polarizing candidate of the bunch, as he does not stand out in any one area of the game, but does very well in each and does it with flair. Baez leads the league in RBI, so I guess he does stand out in one category, but I am not particularly keen on evaluating hitters on their RBI production, but some voters do place special emphasis on the stat. Being on the best team in the NL will certainly boost his case, as will playing strong defense at multiple infield positions.

He’ll be held back by his low OBP and a wRC+ that does not rank on par with the other candidates. His case may also be dampened by the fact he sits nearly a full win behind Carpenter in WAR for the NL lead in position player WAR, which does not support the argument that the sum of his parts is greater than the production of other NL players.

Can a pitcher win the MVP and not the Cy Young? I highly doubt it, but Max Scherzer certainly deserves to be in this discussion. He leads the NL in WAR and has been doing it both as a pitcher and as a hitter. While deGrom leads the NL in pitching WAR, Scherzer has accrued 0.8 WAR as hitter with a wRC+ of 75, which is 5th among pitchers with at least 10 PAs. And of course, as a pitcher, Scherzer leads the NL in innings pitched and K/9, while he is second in ERA to the aforementioned deGrom.

The obvious challenge Scherzer must overcome is the bias against pitchers in the MVP race, especially pitchers on a non-playoff team. It is also highly unlikely many voters even look at Scherzer’s hitting stats, so his candidacy is likely based purely on his pitching metrics, which likely won’t be enough to propel him to an MVP award.

If the season ended today, I would cast my vote for Max Scherzer, which is certainly a unique position, especially since he wouldn’t be my pick for the NL Cy Young award. I may just be picking him in hopes of seeing a pitcher win the MVP and not the Cy Young; however it is much more likely that Scherzer brings home the Cy Young and not the MVP. Clearly, I am not worried about voting for a pitcher for MVP and most of that is due to a lack of another standout candidate at the moment and the performance on both sides of the ball by Scherzer.

While I would vote for Scherzer, many others would not have him at the top of their ballot, especially when he may not even be the best pitcher in his own league. My prediction is that Matt Carpenter will be the one to win the NL MVP award. Carpenter continues to improve his case with the longest active on-base streak in the game at 32 games and the NL lead in home runs and wRC+. While his defensive reputation could lessen his appeal to some voters, he has been the best hitter in the league by a large margin and the defensive metrics this season do not support the narrative that he is a below-average defender. As the Cardinals continue to force their way back into the playoff picture, Carpenter’s case continues to strengthen.